Make Up Is Her Medium

MakeUp Is Her Medium

—The Paintings of Lana G.—

More and more women, as they approach their mid-50’s into their later years, are finding the need to express themselves differently to how they did when they were younger; where the choices such as having kids, for example, was high on their list because their biological clock was ticking or the need to build a career and create a safety net for the future.

A perfect example would be painter Lana G. Her life has been a journey of unexpected twists and turns.

As a young woman growing up in apartheid era South Africa, Lana G fell in love with a Cape-Malay base player. There certainly was no advantage to making a choice to be with someone on the other side of the apartheid fence; only trouble and strife in this time and place, but she remained unphased about her feelings for this man.

Since it was impossible to disguise his cut Malaysian features, she used all her natural resources and creativity and with absolute precision, darkened every inch of exposed skin on her body, successfully passing herself off for a light-eyed Cape Colored (which is a race in South Africa).
This led her to becoming a makeup-artist.

In her mid-50’s, Lana made the leap from live canvases to stretched ones.
“Your ‘50’s are a wonderful time to think about who you want your future self to be. You have reached a pinnacle of understanding of who you are and what you need. It’s a time to re-invent the self and thrive.” And that is exactly what I went about doing.

Painting on a canvas is a natural extension of painting on a person,” she told us. “I tend to dive into the body and kind of sculpt and paint my way outwards. I was never able to ignore what was going on around me and have always been led, by my curiosity and feelings, no matter how uncomfortable it was.”

Her series of paintings called “Women Being Played as Instruments by Men” graphically depicts an acute awareness of the artist’s personal relationships.
“Dating in New York City can be a heart-wrenching experience and by my mid-50’s, my nerves were shot and I was completely exhausted with all the ups and downs of it all. Capturing what was going on inside of me, on canvas, really helped me emotionally.”

“My images speak about the full range of emotion. The complex mixtures of the Universe, spirituality, sex and myth, forgiveness and feeling lost and hopeful all in one painting.”

Her medium is an unusual mix of acrylics, makeup and at times gold, silver and copper leaf.

The work is personal, intimate, visceral and provocative. Her use of color is intoxicating and one of the most powerful elements. Direct and brave, it
exposes tones of her South African origins and depicting a woman finding her way in New York City.

She is a Naïve painter. For those of you unfamiliar with this term, it is art created by a person who lacks the formal education and training that a professional artist undergoes (in anatomy, art history, technique, perspective, ways of seeing) and is recognized, and often imitated, for its childlike simplicity and frankness.

Over the past decade only 10% of all the work acquired by the US’ top galleries were by women. The art world has historically been dominated by men, yet 85% of the nudes in paintings are of women. The gender imbalance of works on display is widespread.

Elspeth Pitt, the curator from the National Gallery of Australia says, “It’s a problem across the industry and there’s many reasons for this. One of them is networks: women were often excluded – historically speaking – from art schools and [from] this boy’s club of directors and curators who were collecting the works of art for these cultural institutions.” Also women were not great at selling themselves. But is that a good enough reason to leave out major works of art?

This inexhaustible and prolific artist lives between New York City and Cape Town.

“Lana G’s work is a fascinating fusion of her African heritage and her contemporary experience living in New York. The vibrant colors of Africa are represented in her modern African Style collection while her other works show a muted palette of sophisticated lines and stories. Yet there is an undeniable blending of the two throughout her art. She tells me stories that overwhelm my senses. Her style is both unique and powerful. What a life she must have lived.”

1. “Klimt meets Gauguin meets Kirchner. Her paintings are very moving…I almost never say that about recent art, by the way. They seem like dreams, strong dreams….”

2. “Women at the cusp – of change, of control, of desire, of fear. Skin tones evoking universality and otherness. Settings and objects that are ordinary and exotic. Palette and lines influenced by this artist, no that artist, oh – and this painting doesn’t fit any of those influences, and yet is clearly Lana G’s style.”

“I am rarely moved by an artist’s work to the point that my heartbeat virtually increases with the sight of it. I find her paintings to be primordial and as such unencumbered by the complexity which tend to obscure the artist’s intended emotional intent or impact. Her ability to recapture her age of innocence and so elegantly translate it, gives her work a uniqueness that makes it, to say the very least, challenging to categorize. I can now add Lana G to that rarified and exclusive list which includes the likes of Pollack and Johns.”

“Even as someone who is already a fan of Lana G’s canvases- bristling as they are with a complex of emotions and seductions and her unique mastery of color and texture—I found “The Misrepresentative” to be a stunningly good piece of work.Less sensuous, yet more emotional, than her previous work; even more haunting.The set of arms and hands that reach up to touch the face come in, in a trick of perspective that is at once visually arresting and emotionally heartwarming.”

“When I first saw her work I was struck by how it was so raw and unfettered. Lana’s work is truly unique and not merely adapting the techniques and ideas of her predecessors. Nothing is held back. When one views her work they do not see the façade of ordinary life, they see the artist in all her glory. What more could one ask for.”

“What a talent she has become!” 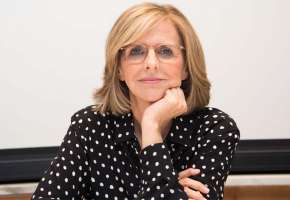 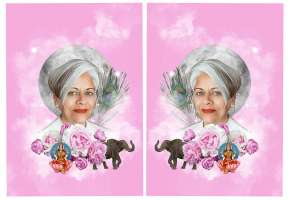 Be the first to know the latest updates